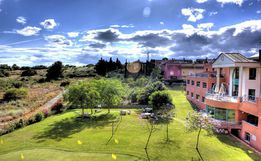 Getting higher education in Spain is not very popular among Russian applicants and their parents. The reason here is rather not underestimation, but simple ignorance. The education system in Spain has centuries-old traditions no less than those of universities in France or England, and in terms of prestige and quality of education, universities in Spain can compete with universities in the United States.

For example, the University of Salamanca (La Universidad de Salamanca) is one of the oldest universities in Europe along with the University of Bologna, Sorbonne, Oxford and Cambridge. Our company cooperates with some of them: Les Roches Marbella.

The level and quality of education in Spanish universities is controlled by the state: specifically for this, the National Institute for Quality was created under the Ministry of Education and Culture of Spain. The modern educational system in Spain includes public and private universities. Public universities are listed above private ones: they occupy the majority of places in the top 10 universities in Spain, but at any of the universities you will receive a high-quality education of the classical model.

The best universities in Spain are accredited by national and international organizations in the field of business, communications and education. The most influential private universities in the country are ESEC Toulouse Barcelona Business School and European University Barcelona. These universities are at the top of the national rankings of business schools, and their programs meet high European and American standards. Most Spanish universities teach in Spanish.

Spanish public universities have adapted all levels of education (higher education, postgraduate studies, master programs) to the requirements of the Bologna Agreement of the European Union and divided them into 3 cycles: Diplomatura, lasts 3 years, analogue of a bachelor's degree, Licenciado (2-3 years), analogue of a European master's program , and Doctorado, which lasts for 2 years, can be compared to Russian doctoral studies.

Spanish today is one of the most popular in the world, however, if you do not want to study in Spanish, you can choose a program in English.

Spanish public universities offer the possibility of studying in Spanish, English or both languages ​​at the same time at the discretion of the student. Note that bilingual programs are available only in the most famous universities, so most often the cost of training in programs in English is more expensive.

We work with one of the best hospitality management schools in the world, Les Roches in Marbella, one of the top ten in the world. We will be happy to help you, like many of our other esteemed clients, to enroll in this prestigious university.