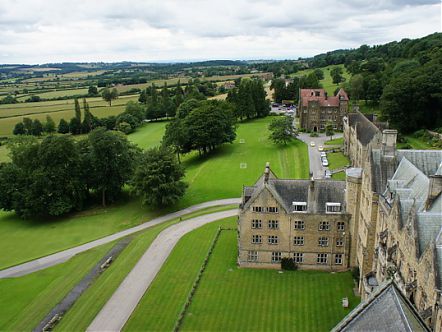 Ampleforth College - a private boarding school, one of the leading Catholic boarding schools in the world. The school is located in North Yorkshire, outstanding for its natural beauty, in the village of Ampleforth in the north of England, about 4.5 hours’ drive from London. Ampleforth College is a thriving institution, and the close relationship between the monastery and the school provides an education that goes beyond the high standards of instruction to provide boys and girls with a spiritual guide for life.

Ampleforth college was founded in 1802 by Benedictine monks from Ampleforth Abbey. Initially, it was a school for boys. The first guest houses opened their doors in 1926. And in 1929, the school acquired the Gilling Castle, located nearby, in which the Gilling Castle Prep school was opened, which later merged with another preparatory school called St. Martin's Ampleforth for children ages 3-13. In 2002, the first girls were admitted to the school, and the school completely switched to a joint form of education.

In total, about 600 students’ study at the school.

The magnificent territory of 809 hectares allows not only to successfully learn English, but also to engage in sports, dancing, badminton, volleyball, orienteering, swimming. With its fantastic location and excellent facilities, Ampleforth College offers all students a wide range of exciting activities. On the territory of the school there are ten boarding houses, each of which is managed by employees who live with their family. Whatever the house your son or daughter will be placed in, they will be under the care of an experienced teacher, supported by an entire team.

Each house is home to about 70 students of all ages who live in a friendly atmosphere. The school has six outdoor courts and one full indoor netball court. All-weather outdoor courts allow all teams to play at the same time, and also allow the school to hold tournaments. The college has a 25-meter indoor pool.

The school strives to provide an extensive curriculum to its students. In grade 9, the student can try a wide range of subjects from the curriculum. The school believes that in this way students will be better prepared for a conscious choice of subjects when studying at the GCSE and A-Level programs. Upon admission, each student of the 9th year of study is distributed to elementary courses in German, Italian or Spanish. Some students may have fewer academic hours due to special learning or music needs, as well as additional English lessons (EAL).

The program for obtaining a certificate of general secondary education. Required to study 6 subjects, 4 subjects are studied by choice.

A two-year university preparatory program. Students choose 4 or 5 subjects for in-depth study. All students take a course in Christian theology.

St. Cuthbert's (St. Cuthbert) is the oldest Ampleforth boarding house, operating since 1926. Pupils of the first year spend the night in residences of six people, the next two years in double rooms, and while studying in high school, they live in single rooms with private bathrooms.

St Thomas ’House was founded in 1946, north of the campus, within the National Park. The house was expanded in the early 1980s and accommodates 53 students.

St. Dunstan's (St. Dantin) was founded in 1935 and moved from the original school buildings to the Nevill House in the late 1970s. There are currently over 60 boys at St Dunstan’s.

St. Edward's & St. Wilfrid's (House of St. Edward and St. Wilfrid) was opened as a purpose-built house in 2001, when the houses of St. Wilfrid and St. Edward united. First-year students spend the night in rooms of six people, over the next two years in double rooms and in high school in single rooms with bathrooms.

St. Hugh's has views of the playing fields and Ampleforth Valley. Accommodation in a boarding house in quadruple rooms during the first year, and then in double and triple rooms with bathroom and single bedrooms for high school students.

St. John's (House of St. John) was founded in 1957 and is located in one of the old college buildings, recently renovated. The house can accommodate 65 boys of the first year of study in rooms of six people; second and third years - in double rooms, which have separate bathrooms; high school students live in their own rooms, many of which have bathrooms.

Oswald's (House of St. Oswald) is located in the heart of the school overlooking the valley. 62 boys live in St. Oswald. The house was founded in 1926 and is one of four original guest houses in Ampleforth. The St. Oswald House began to function in the central part of the school, but was moved in 1973 to the specially built Nevill House. The boarding house is provided in rooms of six for the first three years, and then in single rooms for high school students.

St. Aidan's (St. Aidan) Founded as one of the four original houses in 1926, St Aidan’s became the home of the first girls in Ampleforth. This modern building, built in 2002, is located east of the campus. The final stage of the development of the house was in 2010, when the house was expanded to provide additional space.

Bede's (St. Bede) is one of the four oldest Ampleforth houses located on Aumit Hill. The first girls moved to a carefully restored building in 2006. The house can accommodate more than 60 girls. Pupils of the first year of study are accommodated in rooms of four people, then they all live in single rooms, many of which have bathrooms.

Margaret’s (House of St. Margaret) was founded in 2004, located on the southern part of the campus, overlooking the valley and playing fields. The house can accommodate 70 girls. In the first year, girls live in rooms of four, girls of the second and third years of study are accommodated in double rooms with separate bathrooms, and girls in high school have their own single rooms with bathrooms.

Sports such as football, tennis and golf, students can practice with a professional trainer for 5 hours a week for an additional fee.

In addition to playing sports, students are optionally invited to participate in the Duke of Edinburgh Cup program (community service, sports, expeditions) and engage in military sports training. It is possible to pass the Red Cross exams for first aid.

The Ampleforth school has more than 35 clubs, for example, in natural sciences, karate, bridge, public speaking, chess, the Red Cross, a photography club, and a golf club.

Life at Ampleforth College over the weekend is also eventful, like during the week: clubs, events, sports, offering a variety of opportunities to reveal the talents of students.

More than 30% of students play musical instruments. The school has many musical groups, including an orchestra, groups, ensembles of string and wind instruments.

At school, you can study sculpture and photography. Many students are engaged in dances: ballet, jazz, modern dances and other styles that are available on request.

Student supervision during the first month of training is provided as a gift: assistance in resolving issues related to resettlement, billing, informing parents about the child’s health status, assistance with understanding of academic programs, organization of ext. classes for the child in a particular subject, assistance in choosing the program that is most suitable for the child, transfer to another class, etc.

Welcome
Why choose us
Publications about us
Clients' feedback